On Sunday, April 28, 2013 at 1:30 p.m. at St. Paul’s Church, 114 Montecito, Make Oakland Better Now! will sponsor a public forum, “Can Oakland Afford to Be Safe?,” featuring Chief of Police Howard Jordan, City Administrator Deanna Santana and key staff members to discuss the connection between Oakland’s budget challenges and the need to rebuild the Oakland Police Department. All concerned Oaklanders are urged to attend. Meanwhile, we are beginning our analysis of the mayor’s proposed policy budget and its impact on public safety.

Make Oakland Better Now! is in the process of analyzing the mayor’s proposed policy budget that was released on Wednesday. One element struck us immediately. While this is the first proposed budget to include police academies in years, we question whether those academies will result in the sworn officer increases the mayor has announced. We are concerned that because Oakland needs at least 900 officers, if not more, the goal she posted are being moved and not in the right direction.

The proposed budget assumes that the four academies budgeted for the current and next fiscal years will produce a total of 160 officers. It also assumes that the attrition rate from now until the end of fiscal year 2014-15 will be four officers per month. If these assumptions prove correct, but by our calculation Oakland will actually reach 725 officers in December 2014, dropping down to 701 at the end of this budget period in June 2015:

This number is nowhere near where we need to be in terms of police staffing.The Alameda County Grand Jury recommended that the City of Oakland increase its sworn officers to a minimum of 1,200. The 2010 Police Resource Optimization System analysis called for a minimum of 86 more patrol officers than we had in 2009 (which would have taken us to 926) and optimally 183 more patrol officers (for a total of 1,013). While the city’s Public Safety Consultant Robert Wasserman has not yet made a staffing recommendation, we suspect that he will also recommend a number of sworn officers much higher than 701. And we would not be surprised if the compliance director does the same thing.

Our first concern is that the goal should not be 697 or 701 or anything close to those numbers. The goal should be, at a minimum, 900 total sworn police officers. No one thinks this is going to be easy, but when the city talks about hard decisions, it should be talking about the decisions necessary to get us to a fully staffed police department, not just adding another 50 or so officers. There should be a great deal of focus on creative solutions to this problem.

Our second concern is the issue of officer attrition. Last fall Chief Jordan projected losing five officers to attrition per month. More recently, the administration has been assuming that a recent downward trend in attrition would continue and projected a rate of losing four officers per month.

If Chief Jordan’s projection is correct, then as of June, 2015 we will be at 674 officers, not 701. And if the yield per academy is 37 (the number from the most recent police academy) or fewer, the number of sworn officers would be even lower.

Our third concern is ensuring that once the officers are hired, the city can afford to retain them over the long-term. After Measure Y passed, some litigation and an immense amount of community pressure, the Dellums administration increased the size of the police force to 837 officers in 2008 – the most in the departments’s history.  That number, a few more than Measure Y required, didn’t last long, tumbling down to fewer than 650 by the end of Dellums’ tenure. 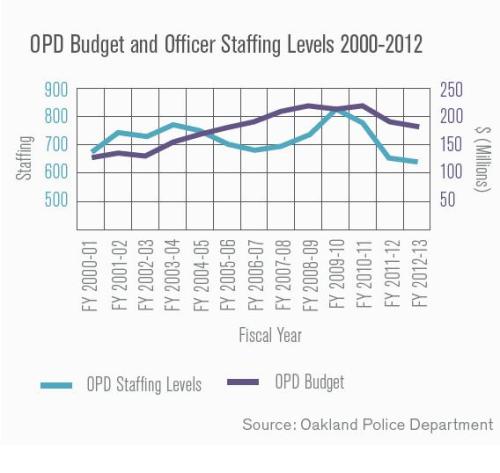 A March 22 administration report tells us that the five-year cost of getting to 833 officers will be  $178 million, or an average of more than $35 million per year:

On top of that, the city projects a total of about $50 million over the same period (or another $10 million per year) for civilian support and supervisory control.

And the additional cost for support and supervisors is projected to be another $58 million, or an average of about $11.5 million per year.

Clearly Oakland can’t take these numbers at face value. A big part of the discussion needs to be about the cost of policing and what can be done to reduce expenses.  Moreover, in the five year forecast, the administration has listed some 35 examples of possible budget balancing strategies. City government has to look hard at these and many others.

And there are questions that in some ways are bigger than the dollars and cents. Why are these costs so high? Why does Oakland spend so much digging itself out of a hole? Why has the police department attrition rate been so high and what can be done to reduce it? How does the department attrition rate differ from that in other departments and why?  We repeatedly hear that after decades of poor police/ community relations, a decade of the NSA, and years of department shrinkage, morale in the department is terrible. What is the fix? Can it be accomplished?  We look forward to hearing Chief Jordan and our other speakers address this and related questions at the MOBN! forum on April 28.